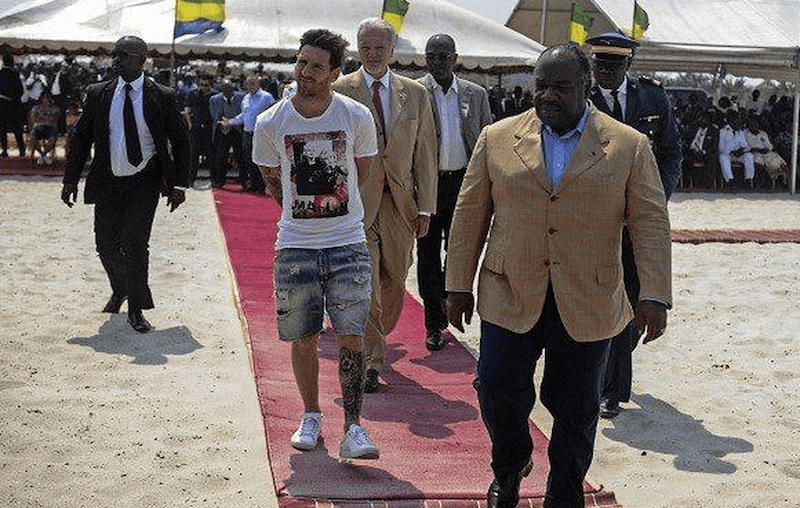 Lionel Messi at Gabon at the weekend

“The Republic of Gabon denies having paid, or even promised to pay, such a sum of money to the Argentinian international footballer Lionel Messi,” the presidency said in a statement.

The 28-year-old multi-millionaire — who turned up unshaven, in a torn pair of shorts — travelled to Port-Gentil, the nation’s economic capital, at the invitation of President Ali Bongo, according to the statement.

Messi “accompanied the head of state to Port-Gentil to lay the foundation stone for the town’s future stadium, in the perspective of the 2017 Africa Cup of Nations (which Gabon is hosting),” the statement added.

Messi’s presence at the event had caused controversy on social media, with many Gabonese questioning the cost of his visit to a country where over a third of the population live below the poverty line, despite the nation boasting oil riches.

The influential football weekly ‘France Football’ added fuel to the fire on Monday when it claimed the Barcelona maestro had received the 3.5 million euros ($3.8 million) for his appearance.

The controversy surrounding Messi’s visit comes hot on the heels of the striker’s second huge disappointment in a major final with the national side when they lost on penalties to hosts Chile in the Copa America on July 4, after losing to Germany in extra-time of last year’s World Cup final.

“Good move or a communications coup for Ali Bongo?”, one person wondered on Twitter, under a photograph of the Gabonese president at the wheel of a convertible Mercedes Jeep driving through the crowds in Libreville, with Messi beside him in the passenger seat.

Messi’s shabby look prompted a multitude of derisory remarks on Facebook with several Gabonese posting photos of themselves in shorts and flip-flops with a suitcase in one hand and a straw hat on their heads, pretending they were en route to South America.

“Today the Argentinian president is going to drive a taxi-bus and pick us up!” one remark read.

Another image circulating on social media that caught people’s imagination was a remodelled cover of the legendary comic book “Tintin in the Congo” renamed “Tintin Messi in the Gabon”, with the star footballer being driven by Bongo, and Tintin’s ever faithful dog ‘Snowy’ in the back seat.

Lionel Messi rumored to have signed contract extension with Barcelona!