Government presents over 1000 vehicles to SHSs

GNA – Government has made available 350 buses and 840 pickup vehicles to Senior High Schools (SHSs) that could not receive vehicles in 2016, President Akufo-Addo announced Sunday.

The President made the announcement on Sunday night in his address to the nation on measure to contain the coronavirus pandemic.

The country had witnessed over 1 million enrolment, the highest in the nation’s history, because of free SHS policy.

The President announced that from Monday, June 22, the next batch of students, who will be going back to school, were the final year SHSs students and the second year Gold Track students, after fruitful consultations with the Conference of Heads of Assisted Secondary Schools and the Association of Principals of Technical Institutes, to agree on the modalities for the return of the students.

The President said the final year SHS students would be in school for a total of six weeks, before sitting for the WASSCE exams over a period of two weeks.

The SHS two Gold Track students, who were returning to complete their first semester like their Green Track colleagues had done, would be in school for six weeks, before going on vacation.

Also, all the 1,167 Senior High Schools in the country had been fumigated and disinfected before the start of academic activities.

Each student, teaching and non-teaching staff, invigilator and school administrator, numbering some 800,000, would be provided with three pieces of reusable face masks, that would be provided tomorrow, and the third within a fortnight.

He encouraged parents to provide their wards and children with at least one face covering on their way to school.

A maximum of 25 students would be permitted in each class.

President Akufo-Addo said there would be no mass gathering and no sporting activities in the schools, and no religious activities, under the new protocols, while social distancing and the wearing of face masks are obligatory in the schools.

He stated that one dormitory block in each senior high school was to be used as an isolation centre, in the event of a student falling sick.

Each SHS has been mapped to a health facility, and care would be provided to the sick by nurses assigned to these schools, he said.
GNA 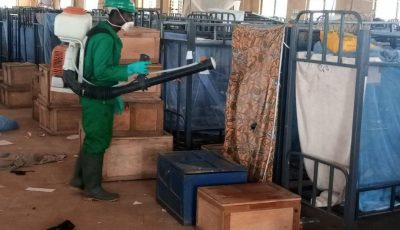 Zoomlion disinfects 823 basic and SHSs in UWR ahead of reopening