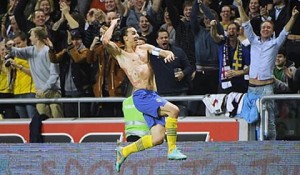 Ibrahimovich, Cech, Alaba top list of stars who will not be going to Brazil for the biggest football Mundial.

PETR CECH:
CZECH  REPUBLIC
Cech played in every minute of his nation’s group stage qualifying campaign but was unable to secure their place in Brazil. The Chelsea shot-stopper conceded nine goals in ten matches as his side finished third in the group, a point behind Denmark and seven behind leaders, Italy.

BRANISLAV IVANOVIC:  SERBIA
Another Chelsea man, another disappointing World Cup quest. He played all ten of his nation’s group games,scoring once, as four away defeats cost a strong side a chance to shock the world next summer.

NEVEN SUBOTIC:
SERBIA
His disappointment at Serbia’s struggle to finish higher than third in Group A was compounded after it was confirmed recently that he will miss the rest of the season with a serious knee injury. The Borussia Dortmund man played in just four of his nation’s ten group games.

DANIEL AGGER:
DENMARK
The Liverpool man might have found it hard to crack the Reds’ lineup this season but was his usual mainstay with Denmark, playing nine qualifiers and tallying four goals. Ultimately, the Danes’ lack of firepower meant their 16-points haul wasn’t enough to reach the playoffs; Agger led his nation in scoring. What more can one man do?

DAVID ALABA:
AUSTRIA
Alaba has been unable to replicate the success he has enjoyed with his club Bayern Munich, at the international level. Despite his six goals, Austria fell short in their quest to reach Brazil next year, finishing third in Group C, three points behind Sweden, who went on to lose to Portugal in the playoffs.

MAREK HAMSIK:
SLOVAKIA
There would be no repeat of 2010’s World Cup heroics this time around as Slovakia fell disappointingly short, finishing third in Group G with 13 points, nowhere near group-topping Bosnia-Herzegovina or playoff-winning Greece (both on 25 pts). Scoring just 11 goals in 10 games against the likes of Lithuania and Liechtenstein was the root of their downfall, with Hamsik’s two goals in 686 minutes far below the high standards he sets weekly at Napoli.

MARTIN SKRTEL:
SLOVAKIA
No repeat of the heroics that took Slovakia to their first World Cup in South Africa 2010. Another Liverpool defender who can put his feet up.Skrtel’s strong defensive display will be  missed in Brazil.Slovakia’s were disappointing all over,failing to defend well and also scored a paltry 11 goals in 10 qualifying games.

ALEKSANDAR KOLAROV:
SERBIA
Wrapping up a dismal qualifying campaign for Eastern European defences is Kolarov who moved to Manchester City after South Africa 2010 but will be staying at home next summer.He and the likes of Branislav Iva novic and Neven Subotic failed to steer Serbia to a second consecutive World Cup appearance.

LUKASZ PISZCZEK:
POLAND
Another Borussia Dortmund man on the list.Piszczek played all three games for Poland in their campaign at the last European Championship which they  co-hosted with neighbours Ukraine.This time around, he won’t play any at the Mundial as Poland could only manage third place in a group that was won by England.

ARDA TURAN:
TURKEY
A fourth-place finish in Group D behind the Netherlands, Romania and Hungary was a poor return for Fatih Terim’s side, especially as they sat in a playoff spot before the final group game, then lost 2-0 to the Dutch. As the side’s playmaker, Atletico Madrid’s Turan scored once in his nine group appearances.

HENRIK MKHITARYAN: ARMENIA
The Borussia Dortmund maestro has impressed in the Bundesliga this season but remains hampered at the international level by one of Europe’s weaker teams. Mkhitaryan played every minute of qualifying and inspired impressive results such as the 2-2 draw vs. Italy in Naples, but it wasn’t enough.

CHRISTIAN ERIKSEN: DENMARK
The good news for the Spurs midfielder, his ankle injury should only keep him out for four weeks. The bad news? No Brazilian adventure to demonstrate his creative talent.The talented midfielder has set the English game alight since his move from Dutch side, Ajax Amsterdam.

AARON RAMSEY:
WALES
The in-form Arsenal midfielder,Aaron Ramsey, missed out as Belgium and Croatia proved to be too strong in their qualification section.He and his international colleague, Gareth Bale, will have to wait for another four years before they can fulfil their ambition of playing at the Mundial.

GYLFI SIGURDSSON: ICELAND
Iceland came close to making it to Brazil qualifying second behind Switzerland in a group that has Slovenia,Norway, Albania and Cyprus.His side just wasn’t strong enough to outlast the dangerous Croatians in a playoff. The Tottenham Hotspurs

PAPISS CISSE :
SENEGAL
Right out of form for his club and now he has to share dressing room with Newcastle team-mate, Cheick Tiote, whose Ivory Coast side qualified at Senegal’s expense. Senegal were undone once again by the Ivoriens who knocked them out of the qualifying race for the 2013 Africa Cup of Nations in South Africa.Cisse and co will miss the chance of emulating the Terangha Lions 2002 who shocked the world by going as far as the quarter-final.

ROBERT LEWANDOWSKI: POLAND
A Polish side in transition couldn’t keep pace in Group H, starting strong but ultimately finishing fourth on 13 points, with defeats to Ukraine and England in their final two group games,leaving observers wondering what could have been. The Dortmund striker’s return was more modest than at the club level, notching three goals in nine qualifying games (809 minutes).

ZLATAN IBRAHIMOVIC: SWEDEN
The PSG, all-world star did his best in an epic playoff battle with Portugal before succumbing to the singular genius of Cristiano Ronaldo. What more could his nation ask of him? Finishing second to a near-perfect German side in Group C, Ibra scored eight of his side’s 21 goals in qualifying, setting up countless others. He will miss out, but with his head held high.

GARETH BALE:
WALES
The Real Madrid star isn’t the first Welsh legend to miss a World Cup — with the team having been only once, in 1958, the likes of Ryan Giggs, Mark Hughes, Neville Southall, John Toshack and Gary Speed never saw one, either — but fans and pundits alike would have expected a better return than fifth place in Group A this time around. Bale led his team in scoring (four goals) despite playing just seven games, insufficient to avoid finishing behind Belgium, Croatia, Serbia and even Scotland.

MOHAMMED SALAH:
EGYPT
Egypt’s elimination means the World  will be deprived of the exciting talents of Mohammed Salah.The former African Champions lost 7-3 on aggregate to the Black Stars of Ghana and the implication of that is, Sallah who scored a wonderful goal in Swiss side, FC Basle champions League shocking victory against Chelsea at the Stamford Bridge, won’t feature in Brazil 2014.

MOHAMMED ABOUTREIKA: EGYPT
Egypt legend,Mohammed Aboutrika  won’t be on the plane to Brazil which probably is his last chance to play at the World Cup.No doubt he will go down in history as one of the most talented footballers never to have played at the Mundial.

I love Ghanaian gospel music, I have nothing against its artistes – Sonnie Badu