By : supportanapuafm
Comment: Off
Tag: an agreement, calabar carnival, come off live on 1st october, production of books, publication ltd 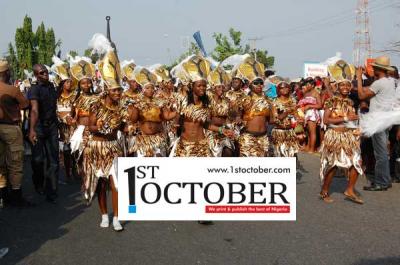 The Cross River State Government and 1st October Publications Ltd have signed an Agreement on the Production of books on the Calabar Carnival Festival.

The agreement was signed few days ago at the Calabar Carnival Commission, Calabar, the Cross River State capital.

The agreement authorised 1st October to be publishing a book series on the Carnival for the next five years.

The book to be titled: Carnival Calabar was conceptualised to develop a first class publicity reference literature for the spectacular annual street party.

Speaking at the signing ceremony, Chairman of the Calabar Carnival Commission Mr. Onah said that the Publication of the book will assist in promoting the carnival and placing the show at par with other world class carnivals. He commended 1st October for taking up the initiative to advance the course of the carnival, stressing “We are happy to partner with you on this initiative”

Responding, Mr Ozoemena Charles thanked the Cross River State Government for appointing 1st October as publishers of the Carnival Calabar. He said that 1st October is glad to identify with the carnival which according to him has become “The Best and the Biggest Street Party in Africa”.

He revealed that the aim of publishing the book series on the Calabar Carnival was to annually celebrate the collective events of the festival as well as market the show internationally with a view to broadening its global patronage.