By : supportanapuafm
Comment: Off
Tag: choirmaster premieres new vedio on his birthday 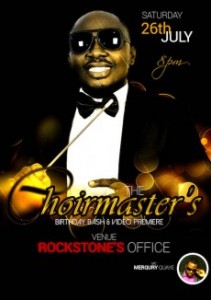 On Saturday July 26th, Rockstones Office will come alive as Choirmaster, the Ghana’s Most Beautiful crooner and a former member of the defunct Praye group, hosts a star-studded birthday.

Choirmaster has revealed that his first-solo studio project is 60 percent finished following the release of his Ghana’s Most Beautiful single which is already enjoying massive airplay in Ghana.

Interestingly, the song has been plugged as theme music for TV3’s flagship reality show Ghana’s Most Beautiful.

Hosted by Ghana’s finest hype man Merqury Quaye, Choirmaster’s birthday bash and video premiere promises to be a night of great music, a lot of beautiful ladies and celebrity friends in the entertainment circuit in Ghana.

It is unknown if his former team will be joining the celebration.