Cocoa’s Debut EP Beneath The Shade due for release. 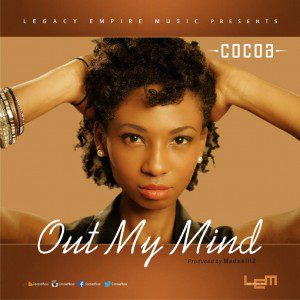 COCOA is a Nigerian RnB/Afro-Pop/Afro-Soul singer and songwriter who hails from Warri in Delta State, was born in Ibadan, Oyo State in 1987. She relocated to England at the age of 14.
She bagged a degree in Psychology and further studied Arts at the British Academy of New Music. Cocoa worked with a Nigerian Artiste/Producer – JJC, the artiste of the hit song – “We Are Africans“. She was featured on the track – “Ada” of JJC’s album titled – “African Dream”, which was produced in London.

In a blast, Cocoa celebrates her Birthday today with the release of her official Debut Single – “Out My Mind“ produced by MadskillZ; Mixed and Mastered by TeeBeeO. The tune crest in you an emotional compound that is beautifully rendered in a clearly define lyrical genre of art. It also strings every fiber of your being from your touch on the play-button. Cocoa’s Debut EP titled “Beneath The Shade’’ is due to be released shortly.