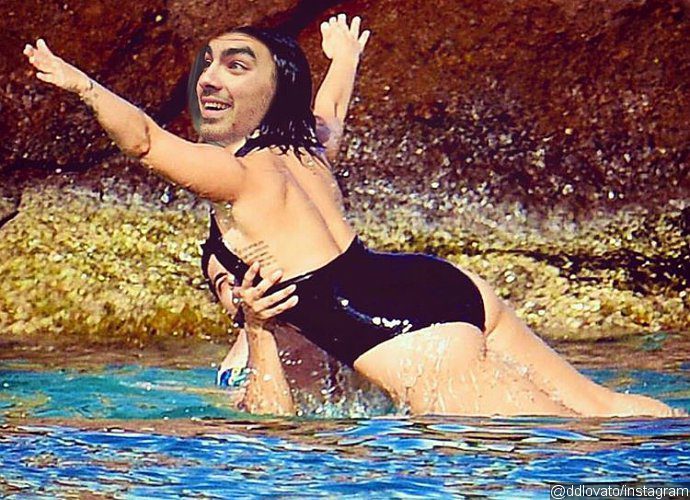 Demi Lovato showed her sense of humor in a new Instagram picture posted on Friday, December 18. The “Cool for the Summer” singer hilariously featured Joe Jonas in a snap of her “Dirty Dancing” moment with her boyfriend Wilmer Valderrama in St. Barth.

The snap was taken when Demi and Wilmer were enjoying the waters during their Caribbean getaway. In the said snap, Wilmer tried to lift up his girlfriend who spread her arms as if she’s flying. However, the 23-year-old singer edited the picture and replaced her face with Joe’s smiling face. She jokingly captioned it, “Ummm… Wilmer? You have some explaining to do……”

Prior to joking about Wilmer having secret romance with Joe, Demi hilariously accused her boyfriend of having bromance with Joe’s younger brother Nick Jonas by saying that she’s the third wheel on their relationship.

On the same day she was caught packing on the PDA, the singer, who’s in St. Barth to help out Victoria’s Secret Angels with their new summer campaign, shared with her 29.4 million followers on Instagram two snaps of her and Wilmer. One of the snaps showed Nick sitting next to Wilmer. The 23-year-old singer cheekily captioned it, “I love these pics so much… Sorry @nickjonas for third wheeling you but your bromance third wheels me too!!!”