Don’t Let Music Get Into Your Head, Omotola To Son.

Nollywood leading diva, Omotola Jalade Ekeinde took to Facebook on Saturday to celebrate and admonish son, 16 year-old Mathew Ekeinde Jnr, a music producer who just gain admission into a university to be careful and not let music get into his head.

Recall that Omotola’s son, who goes by stage name Captain E recently came third at an international music conference producer showcase competition in Atlanta, Georgia, USA, where he was the only African.

Displaying the certificate her son won and some pictures of them together, Omosexy wrote poetic lines to teach the budding music producer a lesson or two on fame and education.

“So, as you start this new journey in the university, we love you; believe in you, and trust you will be deluged by, in all your choices.

I say we, because, remember, you have a lot of mummies and daddies watching for you here too. Okay boy, enjoy the campus life but don’t relent on the music (they think you are greatness already) but you can still be whipped if you take a wrong step…. be confident and believe in yourself” she stated with flourish and ended her message with various hash tags like; The only one from Africa; youngest contestant, Africa’s youngest music producer, etc.

Efya To Give Guests A Musical Treat At “Corporate Time Out”. 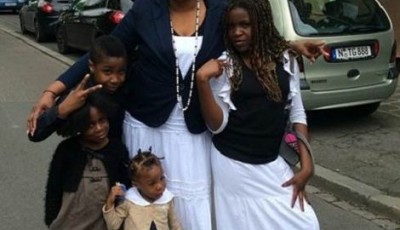 Anyone Who Comes Between A Married Couple Should Be Jailed – Actress Omotola.