Veteran actress and best actress in a supporting role both at Ghana Movie Awards (GMA) and Kumawood Movie festival Awards 2012 winner Emelia Brobbey has received yet another honors which goes into her awards cabinet.

She won best international act at the Royal Africa Awards which took place in Italy, Brescia few months ago. The actress who turned a year older back in January missed the award show for a few reasons but reps from the prestigious event received the award on her behalf.

She expressed her excitement over this recognition and further thanked Golden Bees entertainment whose movie she shot in Italy gained her the award, Miracle films for giving her the opportunity to showcase her talent when she ventured onto the movie scenes.

The actress as well encouraged her fans to anticipate her doing a lot more charitable works, etc and as well expect more exciting projects from her this year. 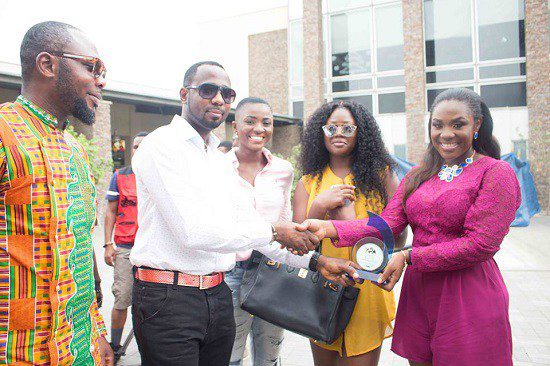 Present on the day were Majid Michel, Salma Mumin, Kalybos, Ahuofe Patri and many others.

Emelia is currently in Accra and on the set of KOFAS Media’s “Amakye & Dede” set directed by Kofi Asamoah and plays the role “Ann” in the movie. The movie stars Majid Michel, Kalybos, Ahuofe Patri, Roselyn Ngissah, etc.

Emelia Brobbey is one of the finest Kumawood stars whose versatility allows her to play any role of her choice. Actress Emelia Brobbey is the CEO of End Time Films and Emelia Brobbey Charity Foundation. Emelia is highly indebted to the great actor Daniel Adeleye who introduced her into the movie industry.

Her first audition was at the Kumasi cultural centre and it was led by Mr. Samuel Nyamekye C.E.O of Miracle Films which landed her first role in a movie titled Tribal war in 2002, after which she has shot over 150 movies and still looking forward in making Ghana and her fans all over the world proud.

More Needs to be Done for Our Track and Field Games – Lydia Forson.