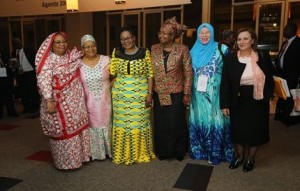 The First Lady of Ghana, Mrs Lordina Mahama has been elected as the new President of the Organisation of African First Ladies Against HIV/AIDS (OAFLA) at the 15th Ordinary General Assembly of OAFLA in Johannesburg, South Africa.

The First Lady, the favourite among the other contestants present at the OAFLA conference organized at the sidelines of the AU conference beat four others including Nigeria in the heavily contested polls to emerge the winner and she will serve for a two year term of office.

She took over from the First Lady of Chad, Hilda Itno Derby who congratulated her for working so hard for Ghana in particular and the continent of Africa s a whole.

The First lady of Malawi also clinched the Vice president title and pledged to assist Mrs Mahama in all her endeavours to raise the Flag of OAFLA very high.

In an acceptance speech, Mrs Mahama expressed her appreciation to the organization for the vote of confidence and the honor repose in her by electing her as the new president.

She said as a founding member of OAFLA Ghana is fully committed to the mission and vision of the organization.

Mrs Mahama, who is expected to be sworn into office in July this year at Addis Ababa, Ethiopia, called on all African First ladies to support her in order to move the organization to higher levels.

” In my own work as the First Lady and OAFLA representative for West Africa for the past two years I have ensured that my priorities revolved around attaining the objectives of our strategic plan of reversing the trends of HIV and AIDS, eliminating mother and child transmission”, she said.

The First Lady said part of the strategic plan was also to empower women and their partners as well as advocating for a comprehensive and integrated sexual and reproductive health services towards maternal mortality.

She indicated that she also focused on advancing health, general well-being and social protection of the orphans and vulnerable children towards a reduction in child morbidity and mortality.

Mrs Mahama has the firm belief that if all First Ladies could ensure the health of their women and empower them economically; the future of Africa would be secured.

She pledged to work fervently as the president of OAFLA and promised the outgoing president, the First Lady of Chad that she would not lose the momentum that she has gathered the work and the great visibility that she has brought to the organization.

Today OAFLA has more than forty (40) African First Ladies as it active members, each leading their national chapters to do exemplary work in the areas of HIV/AIDS, empowering women and children. OAFLA is administered by a Permanent Secretariat in Addis Ababa, with the oversight of a Steering Committee.