Ghanaians Abroad Rise Up Against Mahama.

By : supportanapuafm
Comment: Off
Tag: ghanaians abroad rise up against mahama 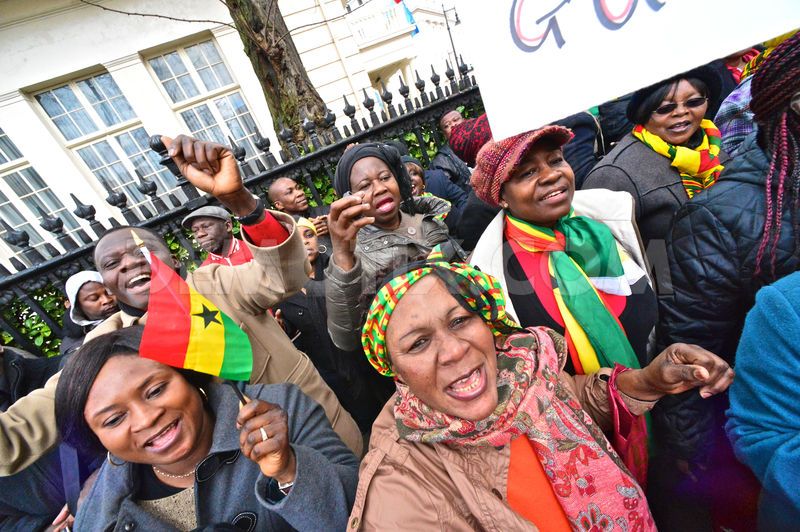 Some Ghanaians in the US will Wednesday (today) demonstrate against their president, John Mahama, who is attending a three-day US–Africa Leaders Summit in Washington DC.

The Summit started Monday and ends Wednesday. The march against Mahama will be at the US Department of State, Washington DC, 22nd & C Street NW, Southside.

The aggrieved US-based Ghanaians say the Mahama administration back home is “corrupt” and “incompetent.”

In a statement copied to StarrFMonline.com, they said, “The collapse of the [National Insurance Health Scheme] NHIS, unprecedented cedi [local currency] depreciation, erratic power supply, high, unpaid salaries and arrears, and the general high cost of living in the face of the profligate lifestyle of [the president] and his appointees,” are some of the factors that have triggered the demonstration.

Other reasons cited by the group include corruption scandals involving the Ghana Youth Employment and Entrepreneurial Development Agency (GYEEDA), a programme designed to reduce youth unemployment; a graft-riddled Savannah Accelerated Development Authority (SADA) project, meant to fight poverty in the impoverish northern part of the country; a non-value-for-money contract between the West African country’s tax collector, Ghana Revenue Authority, and IT firm, SubahInfo Solutions; a Ghc51.2 million ($174 million) paid to a businessman and financier of the governing party as judgment debt about four years ago, which the country’s Supreme Court, recently ruled should be refunded to the State; and a recent decision by the government to fly $3 million to Brazil to pay agitating players of the senior national team, the Black Stars, who threatened to boycott the world cup if they were not paid their bonuses in cash.

“It is imperative to point out that we deeply continue to share in the untoward hardship that has bedeviled our brothers and sisters back home as a result of the incompetence and corrupt mentality of Mahama and his cronies,” they said in their statement, adding: “…In the spirit of togetherness, we will continue to stand with them – unabated – through thick and thin to demand accountability, and better socio-economic standard of living from Mahama and his NDC government,” the group said.

“As developmental partners of our nation but residents in the US, we call on all well-meaning Ghanaians in the States to show up at the demonstration grounds–and in unison–strongly signal to John Mahama that we will continue to make him unpopular in the face of the international community–at any time and any given day that he steps foot in the U.S. until he and his cronies stop operating their “create, loot and share” Ponzi schemes and channel those huge sums of taxpayers monies towards developmental projects,” the statement said.

They believe “by this demonstration, demonstrators will be looking forward to awakening the consciousness and nationalistic sensibilities of John Mahama toward the already suffering Ghanaians. Enough is enough!”