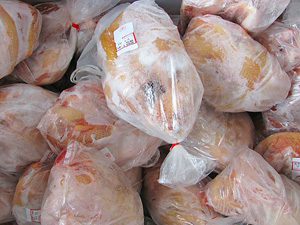 The Ministry of Food and Agriculture is embarking on a project that will cut Ghana’s meat imports to 40 per cent by 2016.

Hannah Bissiw, Deputy Minister of Food and Agriculture, who disclosed this at the launch of Ghana Broiler Revitalization Project in Accra, said the initiative, which was in line with her outfit’s national livestock strategy policy, would create space for the marketing of locally produced chicken.

She said the eggs would be hatched by selected hatcheries and the day old broiler chicks made available to selected hub farms for brooding.

Ghana’s poultry imports have more than quadrupled since 2002 and increasing at a rate of five per cent annually.

She said the launch marked an important beginning for the country to once again take the destiny of the poultry industry into its own hands.

The project was an initiative of the government, through MOFA in collaboration with Ghana National Association of Poultry Farmers (GNAPF) and it is aimed at producing 30,000 metric tonnes of broiler meat this year, with an expected increase to 60,000 metric tonnes by the year 2016.

He said to date, eight hub farms and 58 satellite farms were selected from Ashanti and Brong-Ahafo regions to start the project.