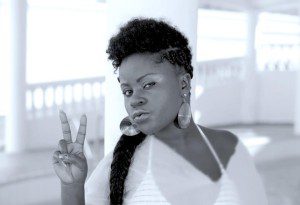 Sexy Diva, Dancehall and Reggae artiste Kaakie, appears to have been swallowed by the new female artistes of the same genre that are currently making waves in the music industry.

Kaakie’s virtual disappearance from the scene has caused her enthusiasts to peddle rumors that she has prematurely dropped the circular microphone for Gospel music.

The “too much” hitmaker  of  the High Grade family, before coming into the limelight was said to be the Praise and worship leader of the church she attended as well as a staunch member of the Scripture Union (SU) while in Secondary School in Achimota.

If the rumors are confirmed, it would just mean that Kaakie has abandoned the genre of music that made her popular and back to her first love. It is expected that her Christian brethrens would welcome her wholeheartedly for her quick transformation.

The Ghana Music Awards Reggae and Dancehall Artiste of the year 2013 have to her credit Hit songs like; EWOO, Too much, Toffee pon Tongue , Kukukmcha, among others which have all enjoyed massive air play.

The  Multi-million dollar question that is still begging for answer is “Is Kaakie really diving into Gospel music?”

Keep your eyes on this page

Nicki Minaj and Meek Mill Will Soon Be Parents?