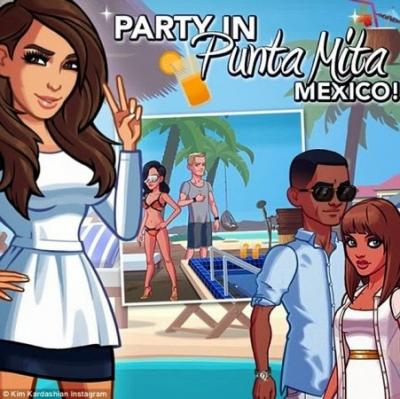 If information making the rounds is anything to go by, it means Kim Kardashian will be earning a whooping  $200million in one year from a free video game she just last month.
The video ranked number three yesterday on the iTunes charts. This made Bloomberg to say that the game, Kim Kardashian: Hollywood, could be the reality star’s most lucrative venture yet. Find the report below…

“Since its June 25 release, Kim Kardashian: Hollywood has risen as high as second among most-downloaded free-to-play games at Apple Inc. (AAPL)’s U.S. App Store, and the well-reviewed title yesterday was third. Its success has driven shares of creator Glu Mobile Inc up 42%. Continue…

“It might be our biggest game of the year,” Chief Executive Officer Niccolo de Masi said in an interview. “We’re not surprised. Kim is a one-of-a-kind talent with an incredibly precise fit to the game engine that we tailored but already had in the company.”

The Kardashian game takes users inside Hollywood, guided by a virtual Kim who offers advice on how to become an A-list celebrity, starting from the so-called E-list. “Dating famous people will get you more fans, too,” instructs Kardashian, who in real life is married to rap singer Kanye West.

While the game is free to play, the goal is to get users hooked on in-app purchases such as clothing or a burst of energy needed for traipsing through Hollywood. Users can spend as much as $99.99 for 175,000 virtual dollars. A trip to Beverly Hills costs 4 game “dollars,” while 400 will buy a necklace.

“Whether you’re following Kim on Twitter, Facebook, Instagram or watching her show, with this game, you can play all the time,” de Masi said. “You can get your Kim interaction anytime you choose.”

Annual revenue from Kim Kardashian: Hollywood may reach $200 million, estimates Douglas Creutz, an analyst with Cowen & Co. in New York, who has the equivalent of a buy rating on Glu Mobile and expects the stock to rise to $6 in the next year.

It’s the only title among the top 10 in the App Store with a five-star rating, the highest possible, based on thousands of user reviews.

“There’s no such thing as bad publicity, right?” Creutz said. “Obviously, Kim Kardashian’s brand has driven people to download the game. But at this point, the game has taken on a life of its own.”