The Kwame Nkrumah University of Science and Technology (KNUST) has been closed down with immediate effect.

All students, with the exception of foreign students have up to midday Tuesday October 23, 2018 to prepare and leave the campus.

In the meantime a 6pm to 6am curfew has been imposed on the campus.

The closure of the university is indefinite.

This decision was made by the university authorities in collaboration with the Ashanti Regional Security Council (REGSEC).

No student is expected to be seen loitering on campus between 6pm and 6am.

Military and police personnel have been deployed to restore order on the campus of KNUST in Kumasi after some students destroyed at least 20 vehicles and other university property during a protest.

The 20 vehicles were mainly private vehicles belonging to the staff of the university and were destroyed at the main administration block.

Some motorbikes and bicycles were also set ablaze.

Some offices were also vandalised as glass windows and doors were smashed. 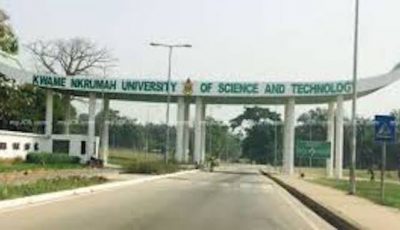 22-Year-Old NPP Parliamentary Aspirant: I Will Give My Three Months Salary Annually To The Party.