Watts, pictured with boyfriend Brian James Lucas, said the officer who detained her “was not overtly racist”

Police in Los Angeles are conducting an internal investigation over accusations officers violated a US actress’s rights by handcuffing and detaining her.

Daniele Watts, who appeared in Quentin Tarantino film Django Unchained, refused to show identification and walked away from officers responding to a report of lewd conduct.

She posted a photo showing her in tears with her hands behind her back.

Her boyfriend, chef Brian James Lucas, was not placed in handcuffs.

In a statement released over the weekend, police said its officers had responded to a report from a passer-by that a couple were indecently exposed inside a silver Mercedes.

In an interview with CNN on Monday, Watts said she and Lucas had been “making out” in the car, were fully clothed and that nothing improper had been taking place. 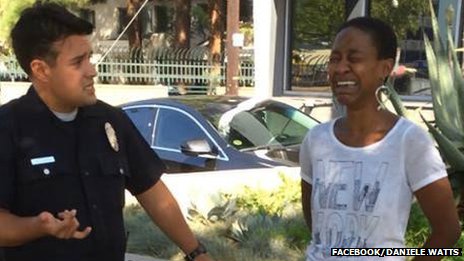 Daniele Watts spent time in handcuffs before being released

In audio footage of the encounter obtained by the TMZ celebrity website, Watts appears to allege the police were called because she was black and her boyfriend was white.

The officer is then heard questioning why she had played “the race card” and insisting he had the authority to request she provide identification.

An LAPD spokesman said US citizens are required to identify themselves if requested to do so by an officer who has reasonable suspicion to believe an offence may have been committed.

Watts played a supporting role in Tarantino’s 2012 Oscar-winning film and had a recurring role in the TV series Weeds.

“I can understand how people would say that I’m being a drama queen,” she was quoted as saying by the Associated Press. “[But] I don’t believe I committed any crime where I deserved to be in handcuffed.