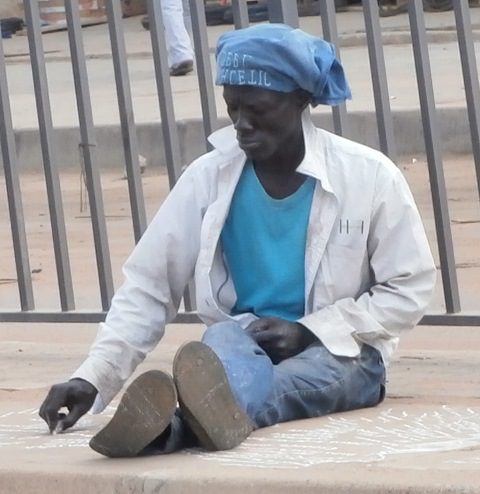 On the main Awoshie-Ablekuma-Pokuase road specifically at Anyaa market lies a spectacle as baffling as it is gripping. For years, commuters in vehicles heading to settlements such as NIC, Fan Milk, Agape, Ablekuma and Pokuase from their duty post in Accra, Nkrumah Circle and other parts have beheld a mentally challenged fellow scribble down ‘things’ on people’s stores and any available space.

With the main road constructed with pavement, Ecomog as he is simply known has found an even more fitting canvas to unleash his creative thoughts. Be it day or night Ecomog has something to offer.

Information gathered indicates that Ecomog together with a brother had the misfortune of having challenges with their mental faculties although their sister lives a normal life selling wares at the Anyaa market.

Sadly, Ecomog’s brother died last year. Although he was not creatively gifted as the academician, he channeled his energy in pulling carts for people for a fee. Their mother also passed-on a while back; thankfully their father lives on.

As to why Ecomog delights in writing so much, sources say he had once been a teacher but overnight had started loosing his mind and over 10 years on, here lies the one-time knowledge giver.

For those who know him quite well, they explain Ecomog could be as sweet as a baby on some occasions delightfully chatting in English, Twi and Ga but when the ‘thing’ comes, he can be abrasive and foul although he is one not given to violent ways. Another endearing thing about the fella as revealed is that he is a fine singer as well and resides in the Anyaa Police station area with his family although he goes days without sleeping at home or showering.

Ghanaians being superstitious as they can be, when asked whether his family has made the effort to send him for medical assessment, many opined his condition ‘efri fie’ to wit it origins from the family.

With a new mental health law in place, it should be possible for care givers or social welfare officers to house mentally challenged persons on the streets and the cost borne by the state.

All Ghanaians, be they homeless or mentally sick have full rights and ought not to be subjected to inhumane treatment or be discriminated against in public or enclosed quarters.

Research in various psychiatric hospitals show that about 70% of inmates in those hospitals were youth between the ages of 18 to 35 years indicating that mental sickness is a real problem on our hands. The more reason why every right thinking individual needs to get involved in demanding better and humane care for those who have lost the ability to use their mind fully and productively.

The case of chocolate Ecomog serves as warning to all that even as bankers, MP’s, lecturers, nurses, doctors, media operatives, artisans, traders and military folks today, tomorrow is never guaranteed and we shall do ourselves a favour by demanding more from government and corporate groups to build care homes which cater for mentally challenged persons while making the environment friendly enough with gardens, birds and nature being around instead of the concretized situation at the Accra Psychiatric Hospital.

For one who when in the mood carries load for some coins and still retains the ability to produce writings. The Asante man needs help to regain his mind and help groom pupils to progress academically as he once did. There is no excuse in allowing such a fertile mind to waste and oh those who can decrypt Ecomog’s writings and messages should help out.