Michael Schumacher, the seven-time Formula 1 champion, is in a critical condition after a skiing accident, says the French hospital treating him.

The 44-year-old German suffered serious brain trauma, was in a coma on arrival and underwent a brain operation.

He was skiing off-piste with his son in the French Alps on Sunday when the accident occurred.

Schumacher was wearing a helmet when he fell and hit his head against a rock, his manager Sabine Kehm said.

Early reports had said his condition was not life-threatening and he reportedly walked away from the accident complaining only of feeling a bit shaken.

The accident took place in the French ski resort of Meribel on Sunday morning.

The resort’s director, Christophe Gernignon-Lecomte, said Schumacher was attended to by two ski patrollers who requested helicopter evacuation to the nearby valley town of Moutiers.

He was subsequently moved to the bigger facility at Grenoble, in south-east France. His wife Corinna and two children are with him.

“Mr Schumacher was admitted to the University Hospital of Grenoble at 12:40 [11:40 GMT], following a skiing accident which occurred in Meribel in the late morning,” the Grenoble hospital said in a statement.

“He suffered a severe head injury with coma on arrival, which required immediate neurosurgical intervention. He remains in a critical situation.”

The hospital statement was signed by the facility’s neurosurgeon, the professor in charge of its anaesthesia/revival unit, and the hospital’s deputy director, reports said.

A hospital official declined to give more details and said more information would be given out on Monday, said Reuters news agency.

Experts say it is likely that his brain began to swell and the urgent surgery was required to relieve the pressure, says the BBC’s Hugh Schofield in Paris.

Professor Gerard Saillant, a close ally and friend of Schumacher, and his former Ferrari team boss Jean Todt are at the hospital.

Prof Saillant is an expert in brain and spine injury. He oversaw Schumacher’s medical care when the driver broke his leg in the 1999 British GP.

After Schumacher retired in 2006, he was seriously hurt in a motorcycling accident in Spain three years later, during which he suffered neck and spine injuries.

But Schumacher managed to recover and made a comeback in F1 with Mercedes in 2010.

After three seasons which yielded just one podium finish, he quit the sport at the end of last year. 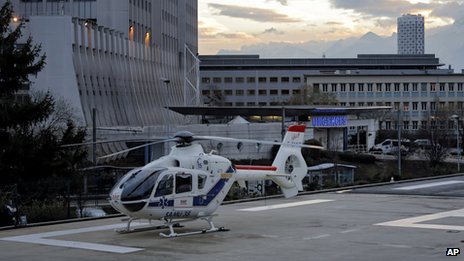 F1 drivers from around the globe have expressed their shock at the news of the accident.

British ex-racer Martin Brundle, who was Schumacher’s F1 teammate at Benetton, tweeted: “Come on Michael, give us one of those race stints at pure qualifying pace to win through, like you used to. You can do it.”

Brazilian driver Felipe Massa posted a picture of himself and Schumacher on Instagram, with the Portuguese message: “I’m praying for God to protect you, brother!”