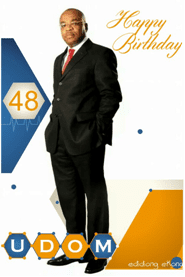 Sir James, frontline comedian and chairman of Comedians International in Akwa Ibom state, has hinted journalist about plans for a birthday tour in honour of The Secretary to the Akwa Ibom State Government-Mr. Udom Gabriel Emmanuel which holds on the eleventh (11th) day of July 2014.

According to him; ‘as Udom adds another year, we are doing this as Governor Akpabio’s beneficiaries, as witnesses to the uncommon transformation in the state, to necessitate continuity and consolidation’. ‘As creative minds, we are celebrating Udom’s feat as a banker and administrator. Finally, as microphone evangelists, we want to ensure that his message is heard’.

The event, in charity homes across the three senatorial districts of the state will feature performances, motivational speeches to mentor displaced children who will like to pursue a career in banking, and donation of gift/food items worth millions.

‘Mr. Right Birthday Charity Tour’ will parade the best of Akwa Ibom entertainers drawn from the three senatorial districts to thrill the children and make Udom’s birthday a memorable one for them.

I’m not searching for a man; stop sending me marriage proposals – Joselyn Dumas