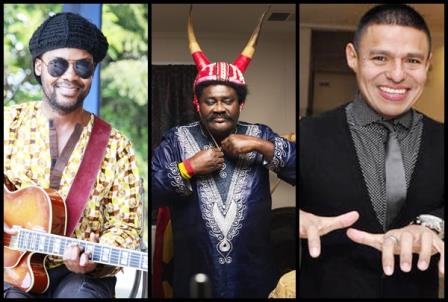 The annual Afro Jazz Festival organized by Scratch Universal Entertainment, will come off from Friday, 18th, 19th & 20th September 2015 with three concerts in Accra and Kumasi.

The first show has been scheduled for 18th, September, 7:00pm at the New Irish Pub, East Legon in Accra where guitarist Constant Boty will launch his “GURU GURU” album. A brilliant guitarist by all standards, Boty is originally from Cote d’Ivoire but has been living in Accra for some years. He has played at nearly all the city’s main music venues.

The festival moves to Kumasi in the Ashanti Region on Saturday, September 19 at the View Bar And Grill, Ahodwo. The concert will feature world -acclaimed Ghanaian percussionist Okyerema Asante and Cuban-born piano virtuoso, Benito Gonzales.
The multi-instrumentalist Okyerema Asante, apart from recording under his own name, has played with many famous musicians including Paul Simon, Hugh Masekela, Herbie Hancock and Lee Ritenour.

A much sought-after keyboardist, Benito Gonzales, graduated top of his class from Havana Music Conservatory and has moved on to greater things. He was adjudged the best piano player in the United States by an esteemed panel of judges including Herbie Hancock and Chic Corea in 2012.

“Benito Gonzales is currently a household name and very much in demand. We are very privileged to have him share his exciting music with us, ” said Paa Kwesi Holdbrook-Smith, producer of the Afro-Jazz Festival.

Okyerema and Gonzales have been working together over the last two years on a project they call Bringing The Flame Home: From Havana To Africa.

The two internationally acknowledged stars will thrill music fans to another concert at the African Regent Hotel in Accra on Sunday, 20th, September to climax the festival.