Samuel Inkoom Pleased With His Form in Europe. 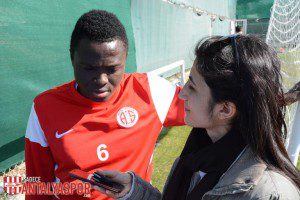 Ghana defender Samuel Inkoom is delighted to have rediscovered his form in Europe following a difficult spell at American Major League side DC United.The 26-year-old endured off-field distraction after he was sued by his landlord for more than $65,000 for failing to pay rent and causing extensive damage to an Arlington property.

The Ghana international left the American side after a short spell to sign for Portuguese side Boavista last summer.

The move to Boavista did lasted only six month as he completed another switch to Turkish side Antalyaspor.

The former Kotoko right-back has rediscovered his form and says he feels thrilled over the development.

“I had some trouble between me and the Club. That’s why I went to Portugal League. I’m so glad I found form in Europe again,” he said

“I was able to find a short time at Boavista.  I am ambitious and hardworking and I tried to prove myself.

There is no yesterday in football, you have to look forward to every time.

“I’m going to fight all the time for my team. I don’t want to leave them alone.”

Inkoom has made two appearances for the club since joining in January.

Michael Essien Rewarded for his goal against Levadiakos.