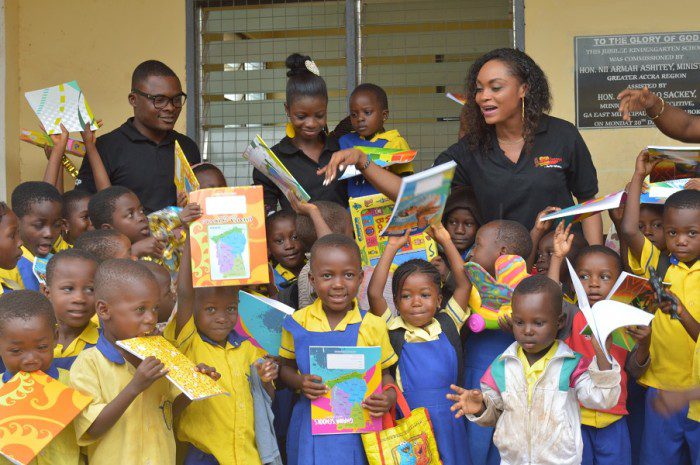 The SKA X’mas Fun Park – an annual social corporate activity organized by SKA Concept, who makes Christmas a merry making one for people living in deprived areas, is ready to take off in Subrisu – Ashanti region this year.The X’mas Fun Park which is aimed at putting smile on the faces of people living in deprived communities in the country – who might not be able to afford the pageantry and the high cost associated with the celebration of Christmas amidst meeting top Ghanaian celebrities, VIP, ministers and their MPS, normally starts with the SKA team touring the deprived areas in the month of July, whilst the party comes off in December.

Last month, the team had the opportunity to successfully tour the village of Subrisu – a farming community in the New Edubiase District of the Ashanti Region.

As to why the SKA team chose Subrisu this year, the CEO of SKA, Samar Koder Agha, said “on our map this year, we are suppose to party with the people of Ashanti region and after going through a long list and research, we finalized on Subrisu.”

she added that the delegation of 6 persons from SKA team were accompanied by the Member of Parliament for New Edubiase, Hon Ernest Kofi Yakah, as they officially called on the chief and people of the community to ask for their permission to organize the charitable project in their village which will take place come 26th December, 2014.

Surprising the team party with over 1000 children – together with the assemblyman for the community, as well as other opinion leaders and the chief of the village at a short ceremony to officially announce the campaign, Miss Samar Koder Agha explained the reason behind the team selecting their village for this year’s event.

The Chief of the village, Nana Albert Buabeng, thanked the SKA charity team for selecting their community for the 2014 event and promised to support the project in any way that he can. Member of the assembly, Mr. James Kofi Buabeng, also advised the youth of the community and other surrounding villages to embrace this gesture and support it.

The SKA Charity team was supported by the MP as they shared some items to the kids in the community as a way of telling them of what to expect come 2014 Boxing Day. According to Miss Samar Koder Agha, though the Christmas Fun Park will come off in Subrisu, the villages and other communities around Subrisu are invited to be part of this project.

She stated that as part of measures to make the programme a success, SKA Concept is calling on all companies to donate to this charitable project – as it aims to feed and support between 2,000- 4,000 individuals in the day.

The Subrisu event will be the 5th event SKA Concept will be organizing. The first one was held at Aforkpakorfe in the Volta Region, second – Hini in the Central region followed by Obelemanya – Eastern region and fourth one in the Western region. “At SKA Concept, we believe charity is a responsibility for all. SKA Concept, lasting Impressions. ” Miss Samar said proudly.  (Skaconcept.com)