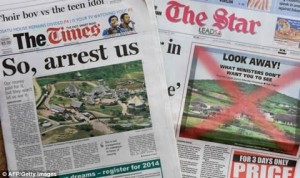 State Security Minister Siyabonga Cwele had on Thursday warned media to stop publishing photographs or footage of Zuma’s rural home, arguing that doing so was in violation of security laws.

But newspapers ignored the warning and yesterday splashed on their front pages pictures of Zuma’s lavishly-refurbished home which comes with a swimming pool, helipad, tuckshop and even a football pitch.

‘It is not done anywhere. We have not seen the images of the White House showing where the security features are. It is not done in any democracy,’ he added
The Times had on its front page an aerial picture of the thatched-roof compound under the headline ‘So, arrest us’.

The Star also had a picture of the homestead, but with a red X imposed across it and a caption ‘Look away! What ministers don’t want you to see”.

The editors’ association said it was ‘disappointed and shocked’ at Thursday’s order.

It vowed to continue publishing the pictures, ‘not with the intention to endanger the life of anyone, but to continue our role as watchdogs of public expenditure,’ said Adriaan Basson of the South African National Editors’ Forum.

‘We believe it is of immense public interest to keep on reporting this grotesque public expenditure of over R200 million [Dh72.4 million] on the private residence of a sitting president,’ said Mr Basson.

The government’s decision to spend over £12.4 million ($20 million) of taxpayer money to revamp Zuma’s private property has sparked public anger amid an economic crunch in a country where 10 million people live on social grants and many have only tin shacks for their homes.

It has spent months fighting to keep secret details of public spending on the enormous private estate – dubbed ‘Zumaville’ – being built in President Zuma’s home region of KwaZulu Natal.

However leaks to South African media have already revealed that £12.4 million of public money has so far been poured into the massive upgrade project.

Ariel photographs of the lush site show an entire hamlet of large, modern buildings behind a huge security fence in rolling countryside.

The spending revelations have prompted widespread public anger within South Africa and claims of corruption.

Many South Africans are incensed at the prospect that their 70-year-old president – who already has three official state residences – might be using taxpayer’s money for private gain.

There are also long running concerns about the financial burden placed on the public purse by the polygamous president’s four wives and estimated 20 children.

Speaking on Thursday morning Minister Cwele cited a law first introduced during the apartheid period to argue that Zuma’s private home is a ‘National Key Point’ which should not be photographed for security reasons.

‘This kind of thing [distributing photos of national key points] happens nowhere else in the world – in no other democracy,’ Minister Cwele argued.

Minister Cwele did not say whether people would be prosecuted for distributing photos of other, better well known National Key Points – such as the country’s parliament building, the opening of which is broadcast live on national television every year.

Nor did he say whether tourists would be banned from taking pictures of the countries’ airports – which are also National Key Points – nor how people are supposed to know what they can and can’t take photographs of, as the full list of National Key Points is itself a state secret.