A gun designed for Indian women

India has launched a new handgun for women, named after a student who was gang-raped in Delhi in December 2012 and later died of her injuries. Officials say it will help women defend themselves, but critics say it’s an insult to the victim’s memory.

In his large office on Kanpur’s Kalpi Road, Abdul Hameed, the general manager of the state-run Indian Ordnance Factory, shows me Nirbheek, the factory’s tiniest gun.

“The six-shot gun is easy to handle and it can hit its target accurately up to 15m [50ft],” he explains, pointing out the word “Nirbheek” engraved on the barrel.

It is definitely a good idea – if you have a licensed weapon, it increases your self-confidence”

Although men can buy the gun too, Nirbheek is being pitched as India’s “first gun for women” and to make it more attractive to them, it comes packaged in a deep maroon jewellery case.

Nirbheek is a synonym of Nirbhaya – the nickname given by the Indian press to the Delhi rape victim, who could not be named under Indian laws. Both words mean fearless in Hindi.

“We generally ask our employees to suggest names for new products. We received a lot of suggestions and decided on ‘Nirbheek’. We believe that women who carry this gun will feel fearless,” Hameed says.

Although work to develop a lighter gun for women began before the Delhi rape, the project was fast-tracked after the crime, which sparked protests nationwide. The 23-year-old was raped, tortured with an iron bar and thrown from a moving bus. 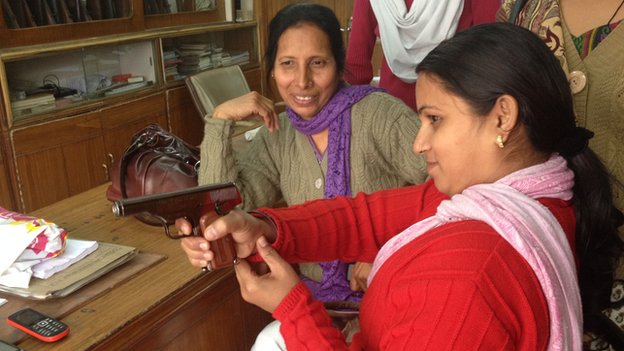 Hameed says Nirbheek will deter attackers, because of the “surprise element”. The factory began taking orders on 5 January and despite a steep price tag of 122,360 rupees ($1,990; £1,213), Hameed says the response has been good, with 10 guns sold and many more enquiries.

The gun’s launch has led Indians to debate whether carrying a gun makes a woman safer. Ram Krishna Chaturvedi, the chief of police for Kanpur and several nearby districts, thinks it does.

“It is definitely a good idea. If you have a licensed weapon, it increases your self-confidence and creates fear in the minds of criminals,” she says.

Among those wanting to buy Nirbheek is Pratibha Gupta, a housewife and student in Kanpur. She says it is “too expensive” and the process of acquiring a licence is “cumbersome”, but she believes that it will be empowering.

“If the person in front of me knows that I have a gun, he will hesitate to touch me, he will know that since she has a gun, she can use it too. The gun will be my supporter, my friend and my strength.” 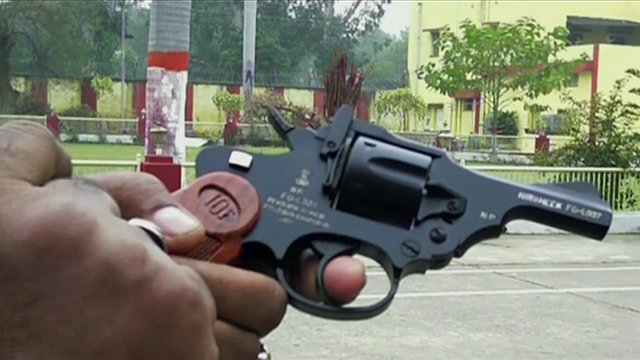 The handgun, marketed at Indian women, has been condemned by activists

Soon after the Delhi gang rape, large numbers of women in Indian cities began to look for ways to make themselves safer.

But many frightened women had little faith in a largely corrupt and inefficient police force. Large numbers enrolled in self-defence classes and began stocking up on pepper spray cans. Some reports suggested there was a rise in the number of women seeking gun licences.

Shocking stories are still making headlines though, such as the case involving a Danish tourist who was attacked by a group of men earlier this week. In Calcutta a girl was gang-raped twice and then set on fire – in three separate incidents. Crime figures from India’s National Crime Records Bureau suggest the number of rapes is on the rise, and that one is committed about every 22 minutes.

Against this background, the makers of Nirbheek believe they have a valuable addition to the armoury of the scared Indian woman.

Anti-gun activists, however, are appalled at the idea.

“I am horrified, shocked and angered,” says Binalakshmi Nepram, founder of the Women Gun Survivors Network in the north-eastern state of Manipur, who says it’s the government’s responsibility to ensure the security of its citizens.

“It’s ridiculous that the state is talking about arming women… The authorities saying, ‘Hey woman, come there’s a new gun for you which will make you safer,’ is an admission of failure on their part.”