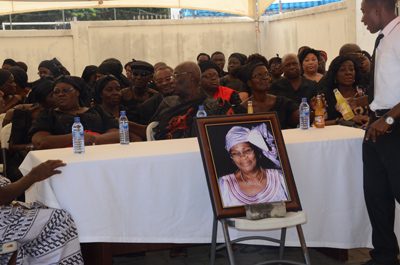 A section of the mourners

Family, political associates and friends of the late Gladys Asmah, former Minister of Fisheries, yesterday converged on the Ridge Church in Accra to commemorate one week of her passing.

The service was attended by high-powered members of the New Patriotic Party (NPP) and sympathisers.

Rt. Rev. Col. John Kwamena Otoo (Rtd) of Ascension Anglican Church-Sekondi in his sermon said the late Gladys Asmah’s death should unite the NPP and the nation as a whole.

He said Mrs Asmah was a lover of peace and played her role very well as a minister, stating that “she left an indelible mark which everyone one should emulate.”

Rev. Otoo urged politicians to live exemplarity lives, noting that “political parties are means to an end but not an end to a means. Therefore we should not allow our various political party belongings to divide and destroy us.”

Dr. Addo Kufuor, former Defence Minister in the Kufuor administration, told DAILY GUIDE that the late Mrs Asmah’s demise was a big blow to the NPP because she was hardworking and very dedicated to service.

“Her demise has really affected the party and we will forever remember her good deeds.”

Kobina Okyere Darko Mensah, who succeeded her as the Member of Parliament for Takoradi also gave a good account of the deceased, saying, “Mrs. Asmah fought for the empowerment of women and was a role model for the women in Takoradi and Ghana as a whole.”

The funeral of the late Mrs Asmah is scheduled to take place at Takoradi in the Western Region. She would be laid in state at her residence on Friday October 31, 2014.

On Saturday November 1, 2014, there would be a funeral service for her at the Ascension Anglican Church, after which she would be buried.

On Sunday November 2, 2014, a thanksgiving service would be held at the Ascension Anglican Church.

The late Mrs. Gladys Asmah, 78, served as the pioneering Women and Children’s Affairs Minister in the Kufuor administration and later played the same role as the maiden Minister of Fisheries.

The late Mrs Asmah died at the Korle Bu Teaching Hospital, where she was admitted for medical treatment

Ghanaians lose faith in the government

How to Keep Your Man Happy, Faithful, and Satisfied

NPP desperate For Power But They Won’t Make It – Alhaji Bature.