Professor Ghartey Ampiah inducted as the Vice Chancellor of UCC

GNA – Professor Ghartey Ampiah has been inducted as the new Vice-Chancellor of the University of Cape Coast (UCC) at a solemn but colourful induction ceremony.

He pledged to provide a leadership that would improve the national and international image of the University.

Professor Ghartey Ampiah, who succeeds Professor Domwini Dabire Kuupole, becomes the 10th Vice-Chancellor of the university since its establishment in 1962.

Nana Sam Brew –Butler, Chairman of the governing Council of UCC, administered the Oath of Office to Professor Ghartey Ampiah before a packed audience comprising academicians, diplomats, Government officials, traditional rulers, family members, friends and loved ones and students of the university.

Prof Ghartey Ampiah said his vision, based on the strategic plan of the University would focus on innovation to enhance the delivery of teaching and research and management of the university to secure wider impact on the society.

He outlined others to include creating, finding and exploiting opportunities to result in better products and service to ensure that the university became a leading higher education institution with a worldwide acclaim.

He said he would promote a digital culture, increase research capacity and acclivity and promote scholarship and dissemination of innovative research to reach both local and international audience.

We are enhancing the capacity of the Centre for International Education to internationalise the university in order to become a leader in international student exchange and academic partnerships.

The Vice-Chancellor said the transformation was necessary to ensure that the University meets its strategic vision and the stiff competition it faced from other local and international universities.

Prof Ghartey Ampiah said he would restructure the activities of the Institute of Education to become a centre of excellence in teacher education in Ghana and the sub-Region.

He expressed gratitude to the University Governing Council for the confidence reposed in him saying he would run an open door administration policy.

Professor Domwini Dabire Kuupolefor thanked the university community for its support and cooperation during his four-year tenure as the VC.

He urged the university community to rally behind the new Vice Chancellor and give him the needed support to enable him move it to a higher pedestal because the whole university would benefit from the success of the new VC.

He expressed the hope that with the calibre of staff at the UCC administration, the university would grow from strength to strength and pledged that he would continue to avail himself to the further growth of the University.

Prof Ghartey Ampiah was unanimously elected by the UCC Council on July 30, per the university’s statutes as the new VC.

Before His appointment, he was the Provost of the College of Education Studies.

He is a Science Education Professor and had been a professional teacher for the past twenty-nine years with dozens of publications recognised both locally and internationally to his credit.

Prof Ghartey Ampiah served as a coordinator, Centre for Research into Quality of Primary Education Ghana (CRIQPEG) from 2006-2010.

Prof Ghartey Ampiah is a member of the Ghana Chemical Society,the Ghana Science Association and the British Association for International and Comparative Education.

He is an astute researcher of international repute with proven knowledge and experience in university management and administration. 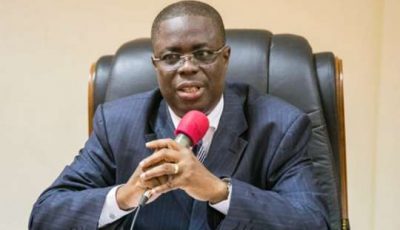