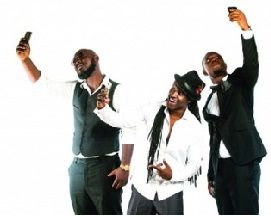 The much-awaited musical concert dubbed: ‘Sallafest’, which is expected to bring various Muslim communities on one platform to celebrate the breaking of the 30-day fast in the month of Ramadan has officially been launched at a colourful ceremony in Accra.

The launching ceremony which attracted a number of personalities was performed by the chief of Nima, Nii Futah.

In a short speech, Nii Futa stated that he was highly impressed with the peaceful relationship that existed between Muslims and Christians in Ghana.

He disclosed that ‘Sallafest’ would bring a large number of Muslims and even some Christians on the same platform; something important for strengthening the bond between the two religious bodies.

‘Sallafest’ last year feted over 10,000 people in Nima and Mamobi where the award-winning trio, VVIP, were born and raised. This year, the organisers have promised to feed more than 10,000 people.

The festival which is in its third year, is being organised by EXP Ghana in collaboration with VVIP and Chapter O, is expected to attract thousands of music lovers from all walks of life.

Sponsors for the event are Frytol, Indomie and Rice Master.