Balotelli has become an instant hit in France after his debut heroics and he spoke out about his time at Liverpool, branding it the ‘worst decision of my life’

Former Liverpool striker Mario Balotelli bagged a brace on his debut for Nice.

The Italian inspired the French side to a 3-2 victory over Marseille, with his double, which was opened in the seventh minute of the match.

He converted a penalty after being named for the first time in boss Lucien Favre’s starting XI at the first opportunity.

Balotelli then doubled his tally with 12 minutes remaining, turning home a right-wing cross from close range to make the score 2-2.

Far from the forlorn figure that left Liverpool on deadline day, Balotelli’s final tally included seven shots, two crosses and a chance created in addition to his brace.

He also put himself about, committing more fouls (four) than any attacker in Ligue 1 this round.

Earlier, on-loan Newcastle winger Florian Thauvin had levelled for Marseille, before ex-Swansea striker Bafetimbi Gomis scored a penalty of his own to make it 2-1.

Wylan Cyprien’s speculative effort squeezed past Yohann Pele in the Marseille goal in the dying minutes to win it for the hosts.

Balotelli was goaded by Gomis as he stepped up for the penalty, then stuttered in the run up before beating the goalkeeper low to his right and holding his arms out stretched in celebration.

The former Manchester City striker moved to Nice on a free transfer on deadline day after a dismal couple of years.

He netted just one Premier League goal during his time on Merseyside, and could only manage the same number during a 20-game Serie A loan spell with AC Milan last season.

Balotelli started up front with youngster Alassane Plea as Favre deployed a 5-3-2 formation in a successful bid to maintain Nice’s unbeaten start to the campaign.

The 26-year-old looked sharp on his bow for his new club, twice going close following his spot kick.

He forced a smart save from the goalkeeper after 17 minutes, cutting in from the left before unleashing a ferocious 20-yard drive which was palmed away.

His long-range free-kick 10 minutes later had to be tipped around the post as he continued to probe.

The win moved Nice up to second in Ligue 1.

Balotelli’s move to the French Riviera has been proceeded by an outburst by his agent Mino Raiola at Liverpool boss Jurgen Klopp.

Raiola claims Klopp was “disrespectful” to his client, and branded the Reds manager “a piece of s***”.

“At the end of the day he [Balotelli] was a player of Liverpool and you need to treat him with respect,” said Raiola, speaking on talkSPORT.

Balotelli spoke for himself before Sunday night’s debut, hitting out at both Brendan Rodgers and Jurgen Klopp.

He told Canal+: “I joined Liverpool. It was the worst mistake of my life.

“Apart from the fans, who were fantastic with me, I must be honest, and the players, who I had a good rapport with, I didn’t like the club.

“I had two coaches, Brendan Rodgers and Jurgen Klopp. As people they didn’t make a good impression on me. I didn’t get along with them.”

EPL player Pape Souare in horrible crash in the UK 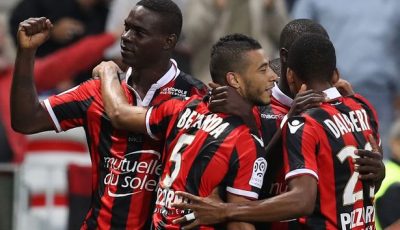