By : supportanapuafm
Comment: Off
Tag: 2016 Parliamentary Election at the Hemang, an Assistant Registrar at the University of Cape Coast (UCC), Lower Denkyira Constituency, Mr. Kwabena Antwi-Konadu

The 2016 Parliamentary Election at the Hemang Lower Denkyira Constituency of the Central Region will not be the usual battle between candidates of the two major political parties, as an independent candidate has emerged.

Mr. Kwabena Antwi-Konadu, an Assistant Registrar at the University of Cape Coast (UCC) publicly declared his intention to contest in the election as an independent candidate at a media launch of his political journey at Jukwa, a town in the Constituency on Tuesday. 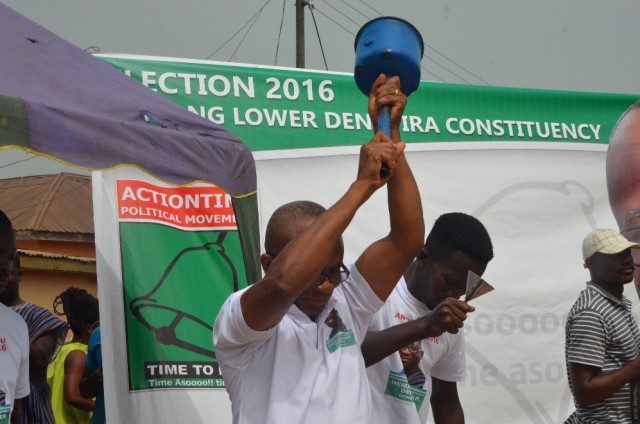 He has green, red, white, black and blue as his colours, with a bell as his symbol and “Time Aso oo! Time Aso!”, meaning “It’s Time”, as his slogan.

The native of Denkyira is optimistic he could match the candidates from the various political parties boot to boot and eventually win the mandate to represent the people.

Mr. Antwi-Konadu, who is also a Senior Broadcast Journalist and Manager of Atlantic (ATL) FM, a UCC-based radio station, said his interaction with the chiefs and people of the area had revealed they needed a visionary and a selfless person to lead in the total development of the Constituency.

“We need people with track record in leadership and service…people with integrity to champion the political, socio-economic transformation of our community,’’ he stated, amidst the ringing of bells interspersed with shouts of “Time Aso oo! Time Aso.

Mr. Antwi-Konadu enumerated some of the key issues he would tackle when given the nod to include both formal and informal education, youth empowerment, women and children’s affairs, infrastructure and agriculture especially cocoa, oil palm and other staples.

He expressed worry over the deplorable state of the road from Cape Coast through to the Kakum National Park to Hemang and queried why the development of the Constituency, which was one of the contributors to national development, leaves much to be desired.

The part-time Lecturer described himself as trustworthy, resourceful, a lobbyist, a team player, people centered, development oriented and an emotionally sound person, with a demonstrable track record of transformational leadership and pledged to serve as a catalyst for development.

He allayed fears that he would lose as an independent candidate, explaining that election victory was not based on party membership but on sympathizers, and this he said was evident in the fact that no political party in the country could boast of two million registered members.

“Whether you belong to a party or not, you are invited to join this movement because our agenda is the total development of our area. This movement is non-discriminatory in nature. It is about time that we reflected on negative partisan considerations so that our community will be developed.”

Asked if he had defected from any party as being speculated, the Management and communication consultant dared any individual or political party with proof to come out, adding that he had no squabbles with any party.
Mr. Antwi-Konadu, would be wrestling with the incumbent MP, Mr. Foster Joseph Andoh of the National Democratic Congress (NDC), and Mr. Bright Wireko-Brobbey of the New Patriotic Party for the seat.