Justin Bieber has profusely apologised for his behaviour after a video was leaked in which he told a racist joke.

Aged just 15 at the time, the Never Say Never hitmaker has blamed his ignorance for the hurtful slur he made, calling it a ‘reckless and immature mistake’ and insisting that he has learned from it and will never do it again.

‘As a young man, I didn’t understand the power of certain words and how they can hurt,’ he said in a statement released on Sunday.
‘I thought it was OK to repeat hurtful words and jokes, but didn’t realise at the time that it wasn’t
funny and that in fact my actions were continuing the ignorance.’

He goes on to say that he is ‘grateful to those close to me who helped me learn those lessons as a young man’.

‘Thanks to friends and family I learned from my mistakes and grew up and apologised for those wrongs. Now that these mistakes from the past have become public, I need to apologise again to all those I have offended,’ he says.

He continues: ‘I’m very sorry. I take my friendships with people of all cultures very seriously and I apologise for offending or hurting anyone with my childish and inexcusable mistake. I was a kid then and I am a man now who knows my responsibility to the world and to not make that mistake again.

‘Ignorance has no place in our society and I hope the sharing of my faults can prevent others from making the same mistake in the future. I thought long and hard about what I wanted to say but telling the truth is always what’s right.

‘Once again….I’m sorry,’ he concludes.

In a clip his PR people tried to suppress, the the-teenage singer was filmed saying the N-word five times. 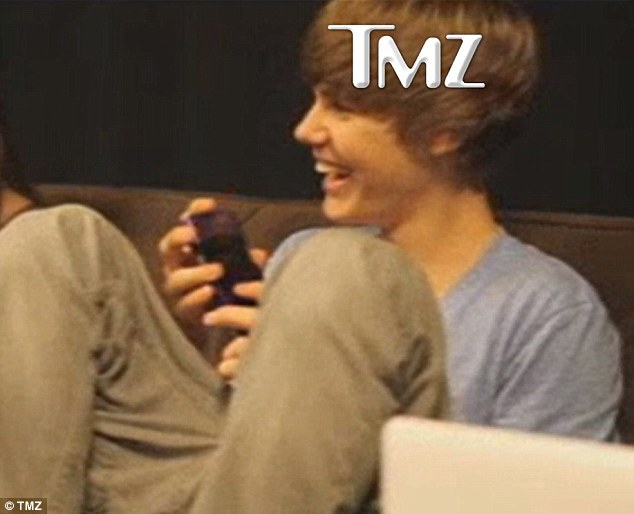 ‘I thought it was OK to repeat hurtful words and jokes’: The now-20-year-old singer blamed his actions on ignorance, but he insists he’s learned his lesson and will never make the same mistake again

The clip was filmed as part of a tour documentary and Bieber’s team of publicists reportedly offered to buy it for a huge sum to keep it out of the public domain.

It is likely to prove particularly damaging to his career because of the help he has received from black artists. The Canadian star is signed to RBMG Records, the label owned by black singer-songwriter Usher Raymond, and he has performed with black artists including will.i.am, Nicki Minaj and Lil Wayne.

He also has a close relationship with Hollywood actor Will Smith, whom he credits with helping him through a string of recent scandals.

The video was shot as part of his 2011 documentary Never Say Never, which charts the lead-up to his New York concert in 2010. Filmed in Los Angeles, it shows him playing with a mobile while sitting in a room full of friends.

One male friend can be heard begging him not to complete the joke, but he grins before delivering the punchline to the camera.

The clip was met with a huge backlash on social media yesterday. Writing on Twitter one of his fans – who call themselves ‘Beliebers’ – said: ‘Bieber is actually disgusting. Man’s gone too far this time.’

Another posted: ‘Bieber – no excuse, no acceptable reason for racism. The use of the N-word [is] disgraceful and racism far too serious to ever be funny.’ A third fan said: ‘Do grow up young man. This is not cool.’

In the past, Bieber has spoken out against racism.

Defending one of his friends, singer Khalil Sharieff, earlier this year, he said: ‘God put these people in my life for a reason, and just because they are African American that makes them a bad influence? These are all the people that I love and all of us are going to help make the world a better place.’

Bieber first achieved fame as a 15-year-old in 2009 when his YouTube songs – recorded in his bedroom – became a global phenomenon.

Since then he has sold more than 15million albums and earned a reported £80million.

But the singer has shed his clean-cut, Christian image and in recent months his increasingly wild lifestyle has landed him in trouble with police. In January, Bieber’s home in Los Angeles was searched after he allegedly threw eggs at a neighbour’s house. Officers found cannabis and cocaine and arrested one of his friends.

The following week, Bieber himself was arrested for allegedly drag-racing his Lamborghini on a public street in Miami and being over the drink-drive limit.

Last year he upset thousands of fans by arriving late for a concert in London, spitting on a crowd from a balcony and lashing out at a photographer in the street.

Miley Cyrus robbed as thieves make off with $100,000 Maserati and jewelry

I have a special feeling for “Skelewu” — Davido

Justin Bieber Attempts To Break The Internet With His Nude PHOTO.